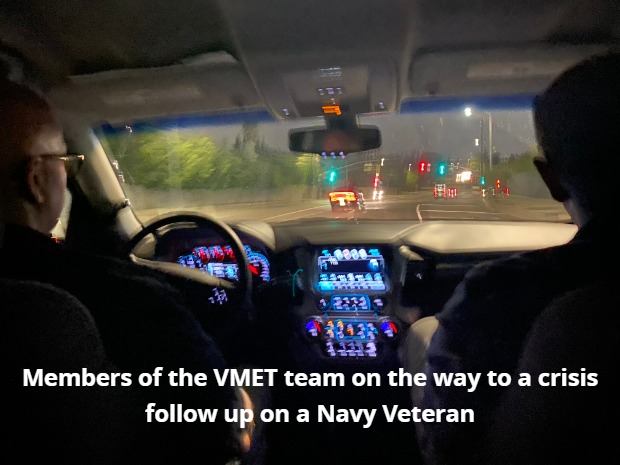 We begin a new year in hopes of renewed beginnings. Broadly, 2020 was challenging. Nationwide, we saw both the best in our communities and some, often painful, indicators of room for growth. Stories of lifesaving interventions and advocacy may feel hard to come by. Still, these stories exist all around us. The Veteran’s Administration Mental Evaluation Team Program (VMET) in Los Angeles County, California, offers one such story.

At Advocates Co-Response Training and Technical Assistance Center (CR-TTAC), we are excited to share what we have learned about the program in conversations with the founders.

LA County’s VMET program is an effective, innovative model focused on reducing suicide among service members, Veterans, and their families using a public health, collaborative approach. Moreover, it is hope-inspiring. Doubtless, we could all use a little hope and inspiration.

According to David Weiner, who served as Chief of the Long Beach Veteran’s Administration (VA) Police until 2019 and spearheaded the launch of the VMET program, the story really begins in 2016. In July of 2016, the VA initiated a study of suicidality trends among Veterans. Reviewing more than 55 million Veteran records nationwide, from 1979 through 2014, researchers found that nearly 20 Veterans per day died by suicide. Of these, an estimated 14 were not receiving services at the time of their death. Although the VA had previously created the Veteran’s Crisis Hotline and increased capacity for same-day mental health appointments, the study also identified gaps in more proactive approaches. Like

other VAs around the country, the Long Beach and West Los Angeles (LA) branches were inspired to action.

In 2017, Chief Weiner and colleagues with the VA Police Department (VAPD) began developing their own Veteran Crisis Negotiation Teams (CNT). Several VAPD officers attended a Mental Health Update class led by instructors from the LA County Sheriff’s Department (LASD) MET unit. Operating for about 28 years, LA County’s MET program is the oldest in the country. After attending the seminar, VAPD officers shared with Weiner—who is, himself, an Air Force Veteran—their insights regarding the need for additional mental health training.

Additionally, in December of 2017, the Substance Abuse and Mental Health Services Administration (SAMHSA) collaborated with the Department of Veteran’s Affairs to launch the “Mayor’s Challenge to Prevent Suicide Among Service Members, Veterans, and Their Families.” Los Angeles county, including the city, was selected as one of eight teams nationwide to pilot the collaborative program. As Chief of the VAPD, Weiner became part of the Mayor’s Challenge. Th is involvement connected Weiner with Lt. John Gannon, LASD MET Commander and Sergeant Richard Bojorquez, LASD MET Veteran Liaison Officer, and inspired modeling VA-CNT on the MET program. Through these collaborations, in August of 2018, VAPD response teams began working with LASD teams as co-responders to calls involving Veterans.

With the largest population in the US, LA County is home to approximately 570,000 Veterans. Across the country, Veterans have the highest rates of negative interactions with law enforcement. Similarities in training and personalities make already difficult situations even more challenging once law enforcement becomes involved. Non-Veteran first responders have difficulty knowing how to interact effectively with Veterans in crisis. According to the LASD 2019 MET Report, in the first nine months, 300 Veterans received help through the program. Results of the collaborative measures are rather impressive and due, in large part, to the innovative aspects of the program.

The VMET co-response model pairs a VA officer and a VA clinician with LASD MET staff and other law enforcement agencies to respond to calls involving Veterans. In addition to effective experience working with Veterans, the majority of VMET staff are, themselves, also Veterans. This optimizes the ability of intervening teams to interact positively, build trust, and deescalate crises. Tensions are also decreased by the fact that all MET staff are non-uniformed responders. Additionally, vehicles are unmarked, lack cage wire, and are designed for comfortable, non-threatening transport. Members of both teams, VAPD and LASD alike, receive nearly 800 hours of extensive training in mental health crisis response and de-escalation before they enter the field.

In 2019, VMET responded to approximately 800 calls involving Veterans in crisis. Of these, almost 300 were placed on inpatient holds and received treatment. Seventy veterans were deterred from death by suicide. At least 10 were actively seeking suicide through police intervention. Each of these vets received mental health care and treatment. The program also succeeded in housing three chronically homeless veterans. In 2019, the Department of Veteran’s Affairs named the VMET program a gold standard practice. Six additional VMET programs are scheduled to launch throughout the country.

These outcomes are not only encouraging, they are also replicable. Based on their training, considerable knowledge, and skill sets, David Weiner and peers have developed two comprehensive training courses for first responders. Both are available to participants nationwide and are certified by California Peace Officer’s Standards and Trainings (CA P.O.S.T.). The initial course provides increased understanding of veteran culture. The intermediate course offers training in identifying mental health conditions in veterans, including traumatic brain injury (TBI), military sexual trauma, and PTSD. These courses, as well as other services, are available through the veteran-owned consulting firm founded by Mr. Weiner. Mr. Weiner can be reached at Secure Measures, LLC, or at dave@secure-measures.com.

Learn about the organizations that help make our work possible.